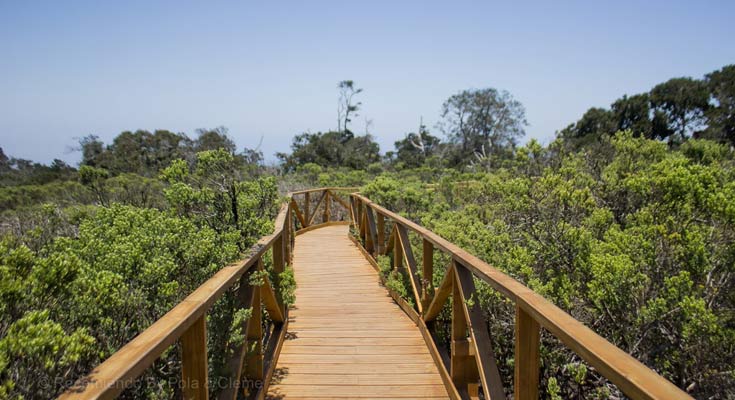 LTSER Fray Jorge is located within the Bosque Fray Jorge National Park (9,000 hectares) in northern Chile and is the nucleus of the Fray Jorge Biosphere Reserve (133,000 hectares). Vegetation in the national park consists primarily of thorny matorral, which includes thorny evergreen and drought-deciduous bushes. The park’s main attraction are the remnants of Valdivian forest that cling to the slopes of the Altos de Talinay hills in the Coastal Range and which have been protected since 1941. LTSER Fray Jorge monitors both the matorral ecosystem and the relict hydrophilic forest.

Research within the matorral ecosystem began in 1989 and currently involves 20 experimental plots measuring 75 x 75 metres each. On these plots, five experimental treatments have been introduced for the exclusion of predators, herbivores and invasive species such as rabbits and hares, and the plots are monitored systematically over time. On each plot, researchers capture and tag small mammals, birds and arthropods, measure woody and herbaceous vegetation coverage, and analyse soil and seed bank characteristics. To date, over 600,000 observations of small mammals have been recorded, including more than 90,000 individuals from at least 10 different species. Total observations of fauna (mammals, birds and arthropods) amount to over 2 million records, making the project’s database one of the largest in South America. The results from this monitoring programme of the semi-arid matorral have served to demonstrate the effect of interannual variation in precipitation regimes and, in particular, the El Niño phenomenon on the ecological dynamics of these communities.

Research on the relict hydrophilic forest began in 1995 and has explored the effects of fragment size on community structure, biotic interactions, and the population dynamics of groups of birds, insects and plant species. At the ecosystem level, studies have been conducted into leaf litter decomposition, the nutrient cycle, the role of fog as a key source of water, and the spatial structure of the patches of forest. These studies have required constant monitoring of climatic, biotic and abiotic variables, and this has enabled researchers to gain an understanding of the potential effects of fragmentation and changes in forest structure and dynamics on loss of coverage and forest species.

To date, LTSER Fray Jorge has produced over 300 publications, both scientific and aimed at the wider public, and support has been secured from a number of research funds (NSF, FONDECYT, ICM). The site’s continued operation has been possible thanks to the effort and dedication of its network of researchers and the fundamental support provided by academic and other institutions, such as the Universidad de La Serena, the Pontificia Universidad Católica de Chile, the University of California, Davis, the University of Idaho, the National Forest Corporation (CONAF), the Institute of Ecology and Biodiversity (IEB), and the Centre for Advanced Studies in Arid Zones (CEAZA).

In 2016, a modern Field Station was completed at LTSER Fray Jorge, providing facilities for visiting researchers. The station was funded by the Institute of Ecology and Biodiversity (IEB) and the Universidad de La Serena. Two meteorological stations connected to servers at CEAZA provide systematic records of climatic variations, and these data are publicly available: Fray Jorge Quebrada Station y Fray Jorge Bosque Station.

View and/or download the field guide to birds (Spanish only, PDF, 4.59 MB)

This guide takes the reader on a short journey through the beauty of the forest, which is dominated by the Olivillo tree (Aextoxicon punctatum) and inhabited by species such as the great horned owl or Tucúquere (Bubo virginianus), which plays a vital role in controlling the rodent population, the Chilean Flicker or Pitío (Colaptes pitius), and the white-crested elaenia or Fío-Fío (Elaenia albiceps), which migrates from Brazil to its breeding grounds in Chile. From the relative silence of the forest, we are transported to the semi-arid matorral, where hundreds of rufous-collared sparrows or chincoles (Zonotrochia capensis), grassland yellow finches or chirihues (Sicalis luteola), common diuca finches (Diuca diuca), Chilean mockingbirds or tencas (Mimus thenca), and myriad other species fill the air with their song. We are then taken on a brief visit to more densely vegetated zones that are home to a multitude of small birds, such as the tufted tit-tyrant or cachudito (Anairetes parulus), the house wren or chercán (Troglodytes aedon), and the plain-mantled tit-spinetail or tijeral (Leptasthenura aegithaloides) with its long, forked tail. If we were to choose one species as an emblem of Fray Jorge, this would without doubt be the thorn-tailed rayadito (Aphrastura spinicauda), a colourful and lively little bird that lives exclusively in native forests and whose distribution extends no further north than the enigmatic relict forests that cover the Altos de Talinay hills.

We hope that this guide, with its wealth of knowledge of local bird life, will contribute to the development of ecotourism in Fray Jorge and its surroundings, and that these charismatic species will help to promote conservation and awareness of the value of the natural environment upon which they depend.